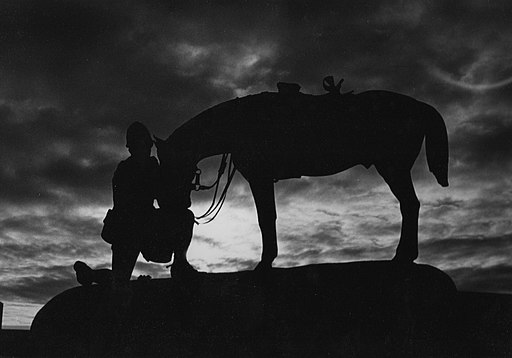 Transport from an earlier age. This stunning photo of the Horse Memorial in Port Elizabeth, taken in September 2012, comes from Wikimendia Commons and is attributed to Izindaba.

The Horse Memorial (Cape Road, Port Elizabeth, South Africa) bears the words: “greatness of a nation consists not so much in the number of its people or the extent of its territory as in the extent and justice of its compassion” “erected by public subscription in recognition of the services of the gallant animals which perished in the anglo boer war 1899-1902”

South African public transport policy for road-based public transport in its 12 major cities is that there should be integrated systems.  Bus Rapid Transit will be a significant element in all cases.

Each city will plan its routes and services and contract with operators for the provision of those services. In the first 12-year period, operations will be allocated to existing operators  by means of negotiated contracts. These will be ‘gross’ contracts – that is, the operators will be paid for the operation of the services, but the city will administer the fare collection system and retain the income from passengers.

The existing operators are a mixture of formal sector bus companies and informal-sector ‘taxis’ using minibuses of up to 16-seat capacity.

The bus companies, other than the very smallest, exist in the formal sector of business and have in most cases been operating for many years under a subsidy contract with government.

By contrast, taxis operate unscheduled line-haul services. They are required to apply for permits from the government body tasked with issuing them, but there are no contracts and definitely no subsidy.  Fares are cash-based with no ticketing system. Taxis carry some 65- 75 per cent of passengers in each of the major cities of South Africa.

Most of the cities are trying to persuade the taxi operators on a route to form a company in which the operators become shareholders. The company will then receive a contract from the city for the provision of services.

On the day the new service comes into operation, the existing minibus-taxis will be removed from the roads and scrapped. They will be replaced by a new fleet of Bus Rapid Transit (BRT) buses and feeder services using buses and midibuses..

There has been a natural reluctance on the part of the informal sector taxi operators to commit themselves so irrevocably to something which is completely alien to them.  That uncertainty has manifested itself in all the cities which have so far begun planning for the new integrated systems.  It has been a major cause of delay in implementation.

The Nelson Mandela Bay Municipality, one of the 12 cities, recognised this potential ‘fear of change’ resistance at an early stage in its planning. It has therefore built in to the implementation programme a transitional process which will enable the informal sector taxi operators to ‘test the water’ and ensure that government promises are being fulfilled, before taking the irrevocable step of giving up their vehicles and businesses in exchange for a shareholding in the integrated system.

It is of interest that the two South African cities which have thus far implemented an integrated public transport route based on a BRT corridor have both, in doing so, found it necessary to provide for a transitional or interim phase of the kind already included in the Nelson Mandela Bay model.

The paper describes the distinctive features of the Nelson Mandela Bay contracting model.